This statue was created by José Thedim and canonically crowned by Pope Pius XII through his legate, Cardinal Masalla, on May 13, 1946, the 29th anniversary of the first apparition of Our Lady of Fatima.2 A year later, this statue became a pilgrim statue traveling east through Europe after it had been devastated by World War II.3 It is now retired and on display in the Chapel of Apparitions at the Basilica of Our Lady of Fatima in Portugal. St. John Paul the Great was later the target of an assasination attempt on May 13, 1981. He attributed the failure of the attempt to the Blessed Mother, particularly Our Lady of Fatima, and one of the bullets that struck him has been placed into the crown of this statue.4

The International Pilgrim Virgin Statue of Our Lady of Fatima

This statue is a twin statue of the one found in the Chapel of Apparitions today and it was also sculpted by José Thedim. It was blessed by the bishop of Leiria, Portugal, in Fatima on the 30th anniversary of the last apparition of Our Lady of Fatima and the miracle of the Sun, October 13, 1947. “The Bishop prayed that Mary herself accompany the statue wherever it goes. The purpose of the Pilgrim Virgin Statue tours was and still is to bring the graces of Fatima and Our Lady’s message of hope, peace and salvation to those many millions of people who may never have an opportunity to make a pilgrimage to Fatima itself.”5 Like its sister statue, this image of Our Lady traveled throughout the world but she began traveling west instead of east. She has visited over 100 countries and miracles have been reported to be associated with this image.6

The Bishop of Leiria blessed this statue on October 13, 1952, and it was housed in the Meditation Room of the United Nations. Monsignor Colgan led a rosary there and later founded the Blue Army, which has been renamed World Apostolate of Fatima. The statue does not go on tours but does visit individual parishes. She has traveled throughout the world and 1st class relics of Blessed Francesco and Jacinta accompany the statue along with a piece of the tree on which the Blessed Mother appeared.7 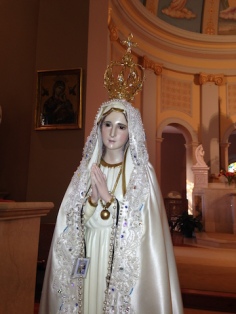